Above the cliffs of the northern coast of Tenerife rises Roque de Taborno, being one of the best panoramic views of the Natural Park of Anaga.

Roque de Taborno hike is possible to be done all year round but during the autumn and winter can be closed or can be very dangerous due to rain, fog and strong winds and is not recommended. Being closed means that if something happens to you while hiking in that closed area is your responsibility. The wet climate of this area

Sunny during all the route, no shadows at the trail. Is possible to rest in caves with really nice views.

In the path to Roque de Taborno is found a drinking water spot. Is found near the small farm.
The difficulty of the route is easy. It’s a short hike with almost no elevation gained. Though it is easy, the path is impressively narrow at some parts so is important to be careful.
The path that goes around the Roque de Taborno has several parts where the path is very narrow. It can be slippery due to weather conditions and it is above the cliffs of the mountain. So the path is exposed and not recommended to those that suffer vertigo, hike with kids and those who don’t feel okay walking in exposed routes. 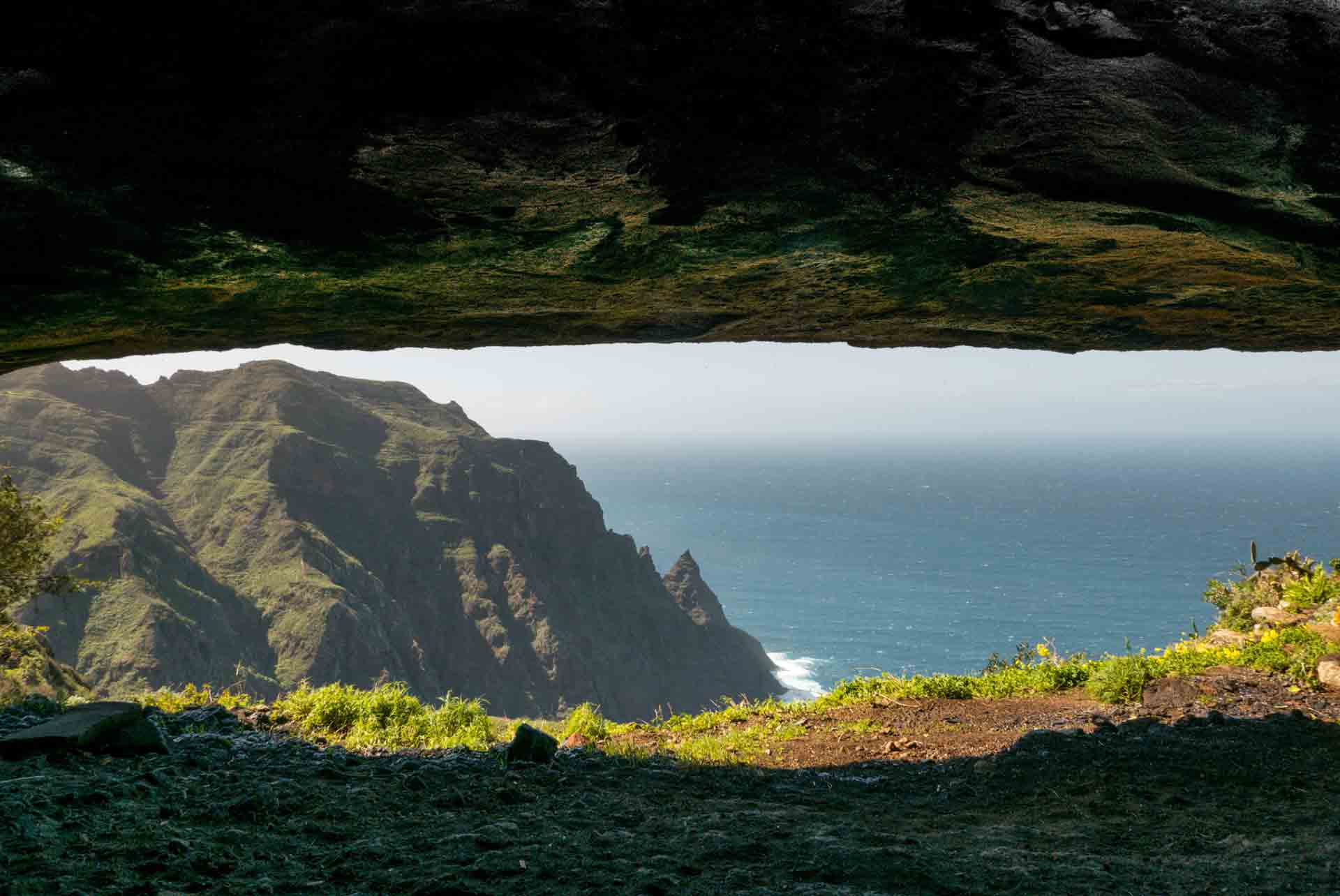 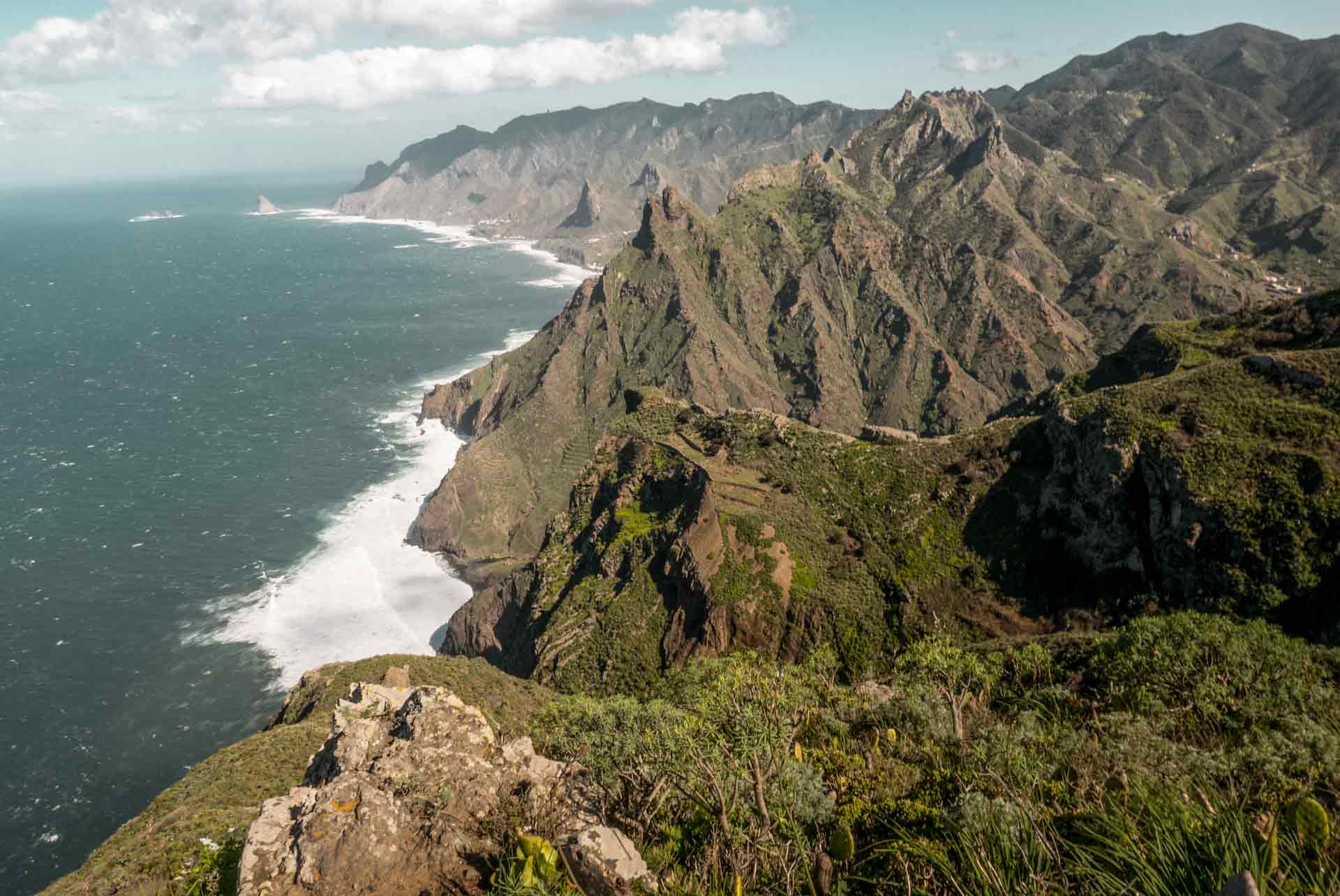 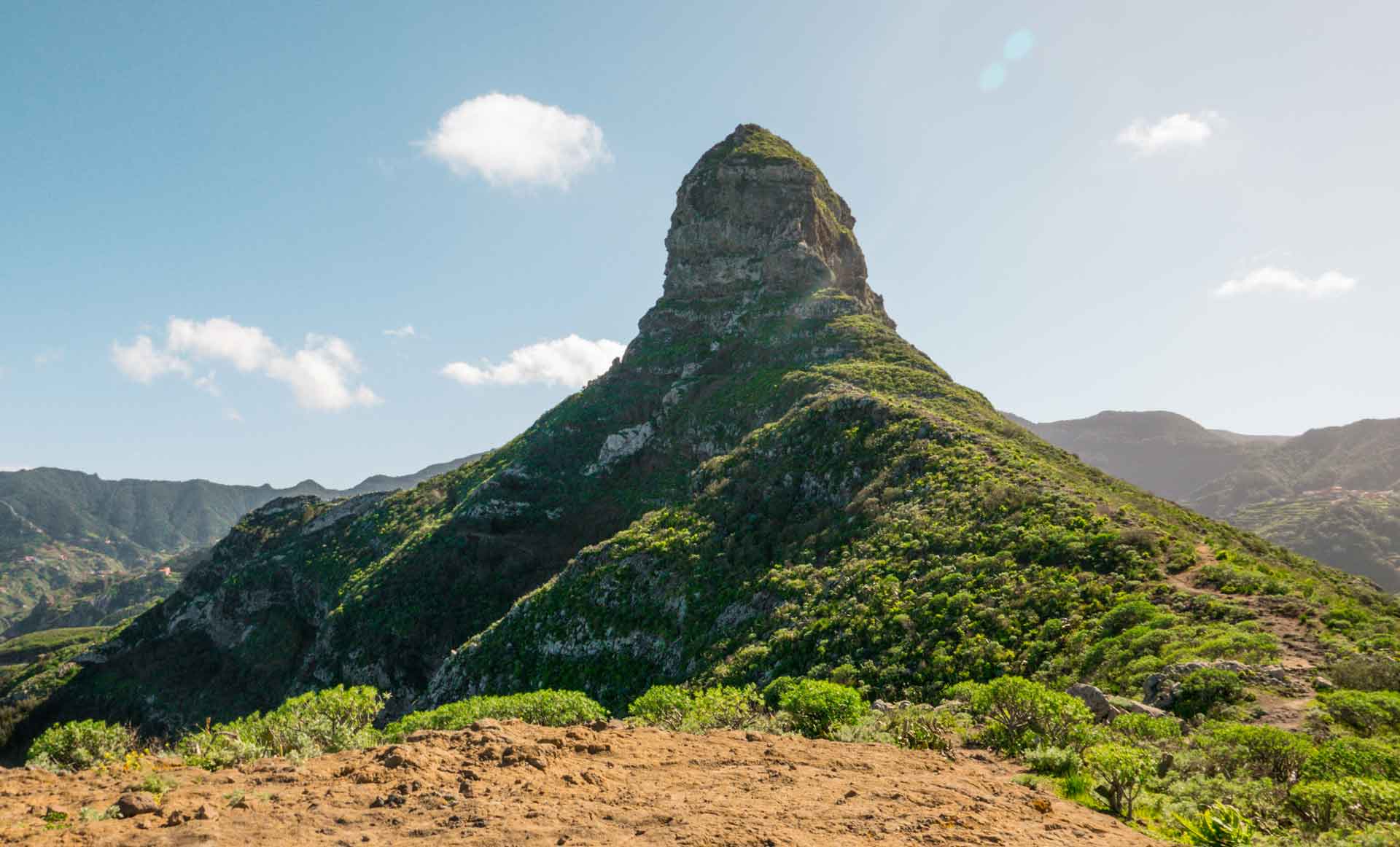 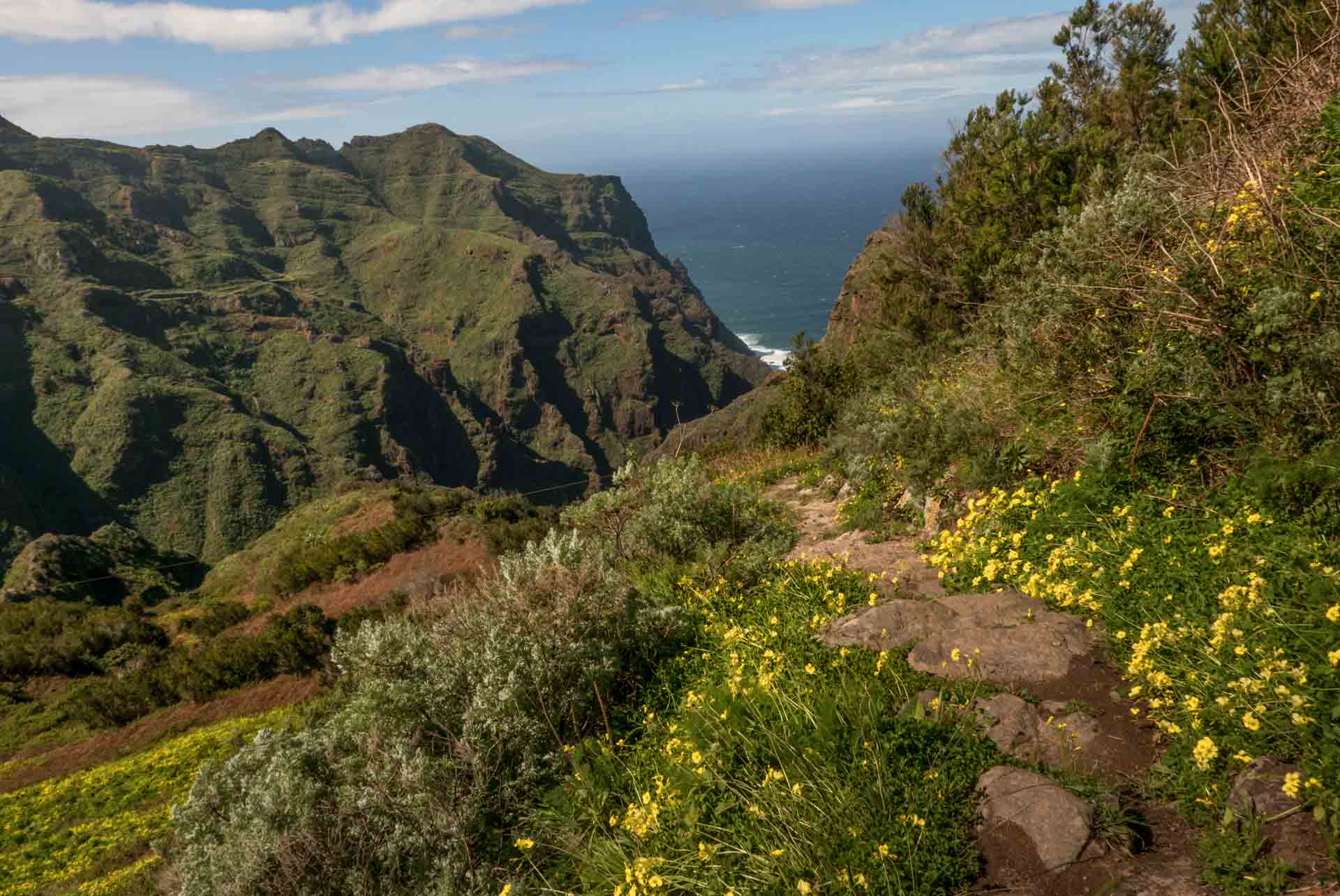 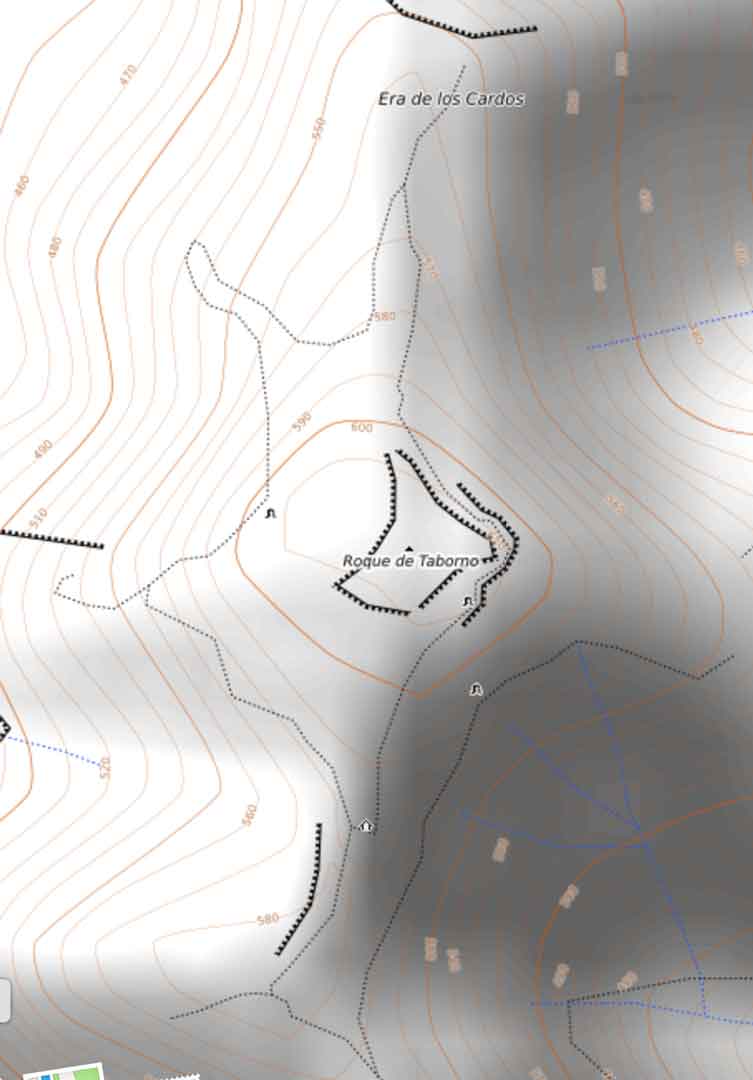 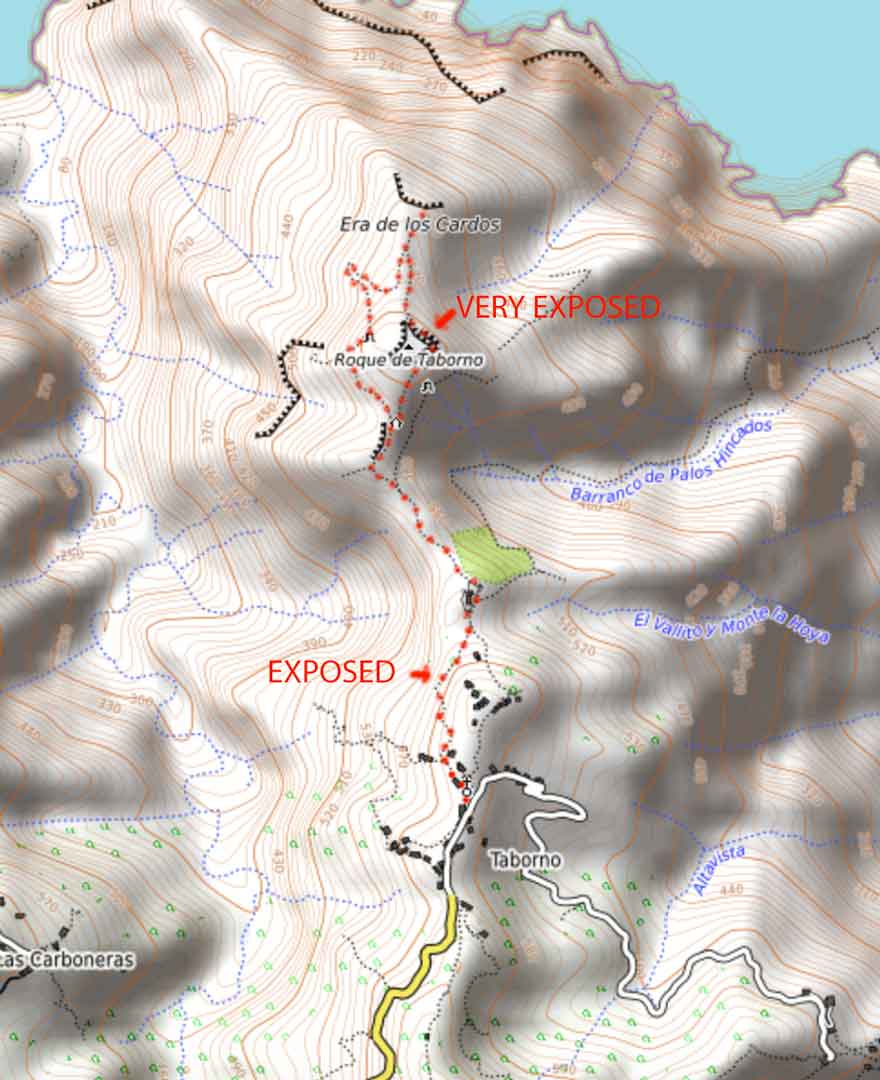 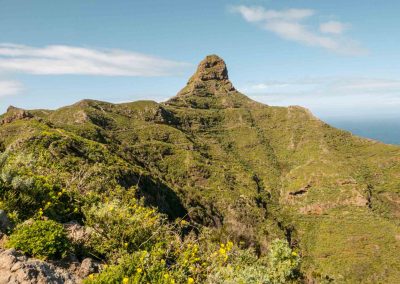 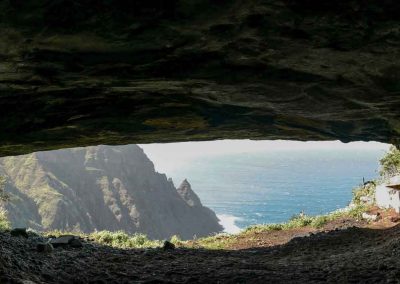 Panoramic view of the cave 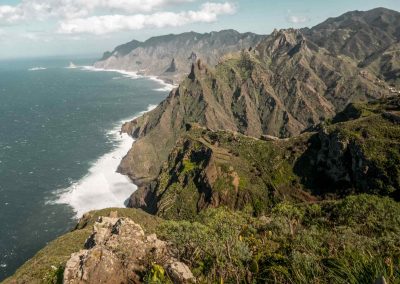 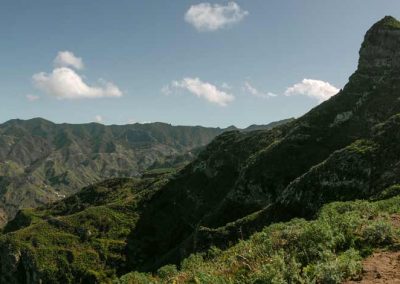 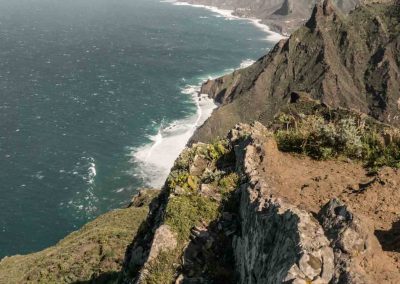 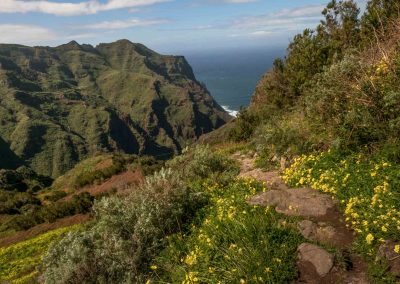 Path to the west dace of Roque Taborno 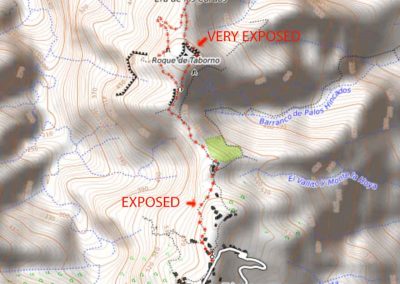 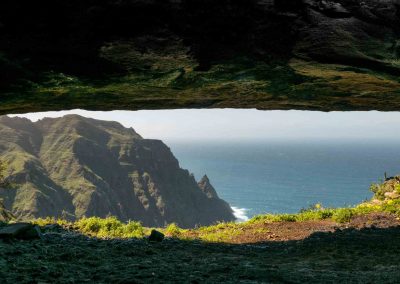 Cave views at the feet of Roque de Taborno 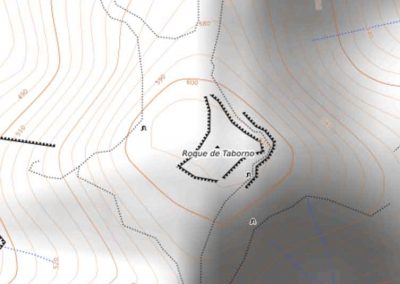 Hiking to Roque Taborno in Tenerife

The basaltic rock that arises from the ocean at the west of the coast of Anaga offers one of the best panoramic views at the north of Tenerife. Roque de Taborno reaches 700m high but this hike surrounds the mountain, giving a 360º view of it and the different atractions of the north coast of Tenerife.

In case is needed to arrive by bus to Taborno will be taken the bus to Cruce de las Carboneras where following the road to El Bailadero for 100m will be found at the left, a path signal where it shows the way to Azur and Taborno. Following this path during 40 minutes leads to Taborno where this hike starts.

Hike to the viewpoint of Roque Taborno

The trail starts at the left side of the church and begins being a small street of the village and after few meters, it becomes a hiking path. This first part can be a filter for those who are not sure if they can walk the exposed parts because the path is very narrow and one has to be careful. After this part, there is a signal to Roque de Taborno and the drinking water spot.

The path keeps going next to the small farm located in the top of the small hill. The trail will get closer to the mountain and it will bifurcate and the path to the right doesn’t lead to any special place. Following the path on the left and not taking the path that goes up to a small building, leads to the panoramic viewpoint of the north face of Roque de Taborno after passing by a beautiful cave.

From the panoramic point is possible to see all the north coast of Tenerife and the different Roques of the Natural Park of Anaga. The landscape is incredibly wild and gorgeous and it’s seen from an isolated location where you can take a rest in the wildest area of Tenerife.

The way back is possible following the same route it has been followed or is possible to complete the round walk, being the most exposed part of the hike. From the viewpoint, the path goes all the way up to the Roque and goes all around the mountain ending again at the same point where the small building was seen.

-Be careful with the weather conditions because it can change quickly and in an unexpected way, especially during winter. In case of bad weather conditions like winds up to 50km/h, fog, rain or other inclement weather do not hike around the area. It is very dangerous and

-In case of setting up a tent to avoid the camping areas and nearby without permission and notice that is illegal to set up a tent in Spain. If it is wanted to take the risk, set up the tent in a remote place at sunset and wake up early to avoid forest rangers. During summertime, there are more controls.

-Your safety is our concern but it is your responsibility. Hiking in high mountain areas requires a minimum of preparation and wearing warm clothes and proper boots always with us.