The Volcano Route of La Palma

Along the Cumbre Vieja, the volcanoes trail is the most incredible hike through a volcanic landscape in the Canary Islands

The volcano route of La Palma has restrictions during winter due to weather conditions (strong winds, storms or snow). The best moment to walk through this route is in spring and autumn.

Above 1400m there is almost no vegetation so half part of the route is with shade and the volcanoes summits are exposed to the sun.

The route goes through the highest volcanoes so there are few places where you can fill your reservoir. At El Pilar is possible to take water. After passing the Volcán de Martin there is a water fountain called Fuente del Tion. In Fuencaliente there are all the commodities needed.
Depending on how many days is planed the trail, the difficulty changes. It has to be considered the elevation gained during the trail and the weather conditions can make the whole route very difficult.
The route is exposed itself by the terrain and weather conditions. Heavy winds or heavy rain it can make the route more challenging and dangerous. During winter, if the snow falls in the summits, the paths can be very slippery and are closed to hikers. 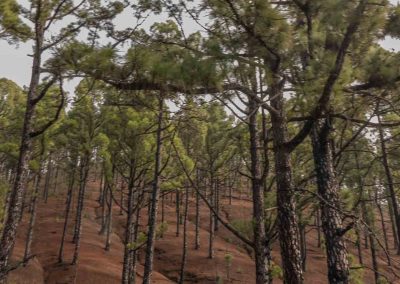 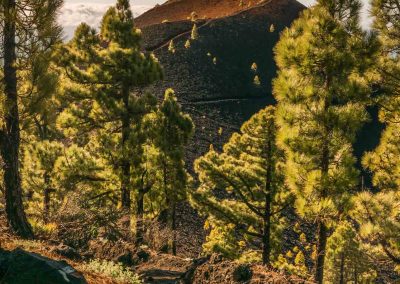 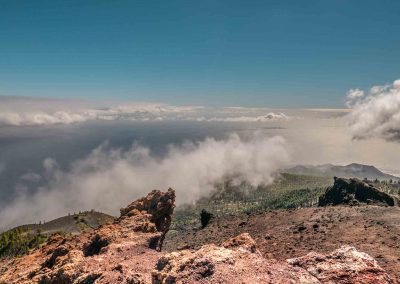 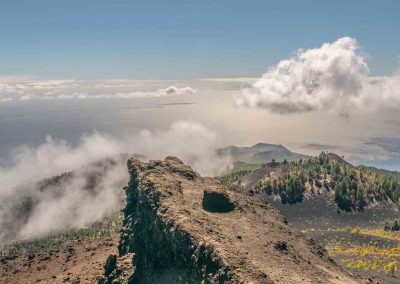 Ridge in the volcanoes trail 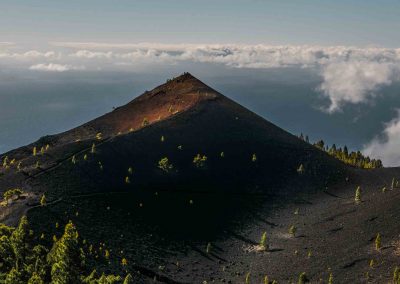 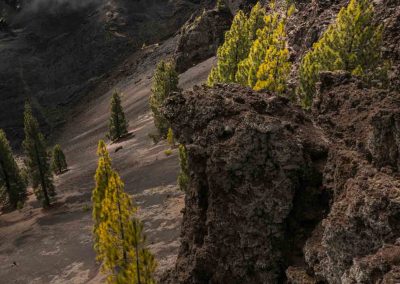 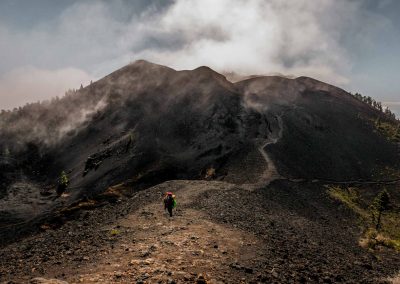 Unique landscape in the vlcanoes trail 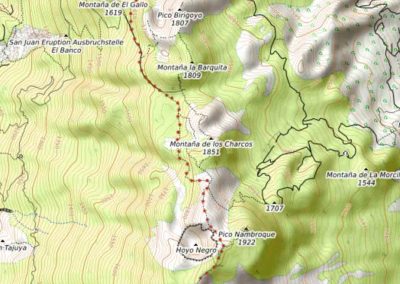 First part of the volcanoes route of La Palma 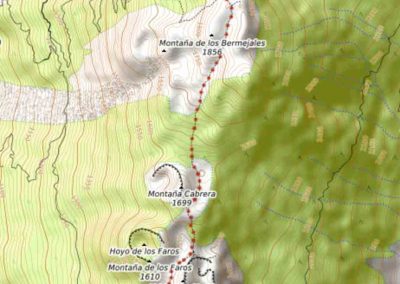 Second part of the volcanoes route of La Palma 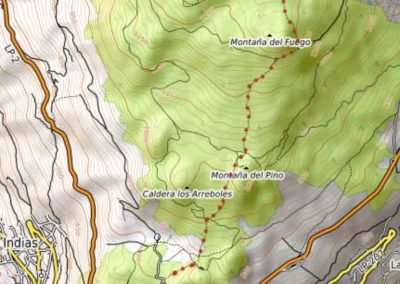 Third part of the volcanoes route of La Palma 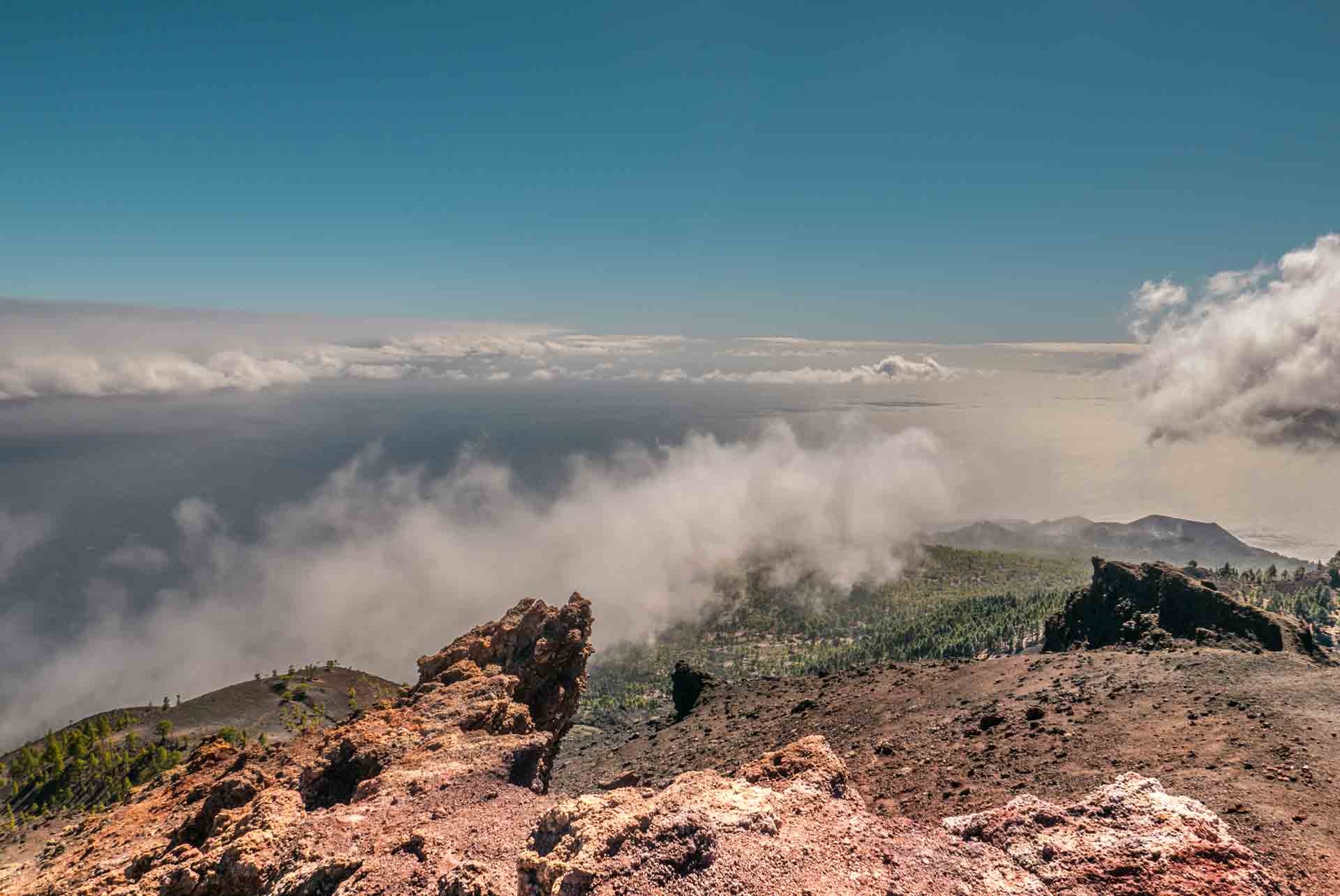 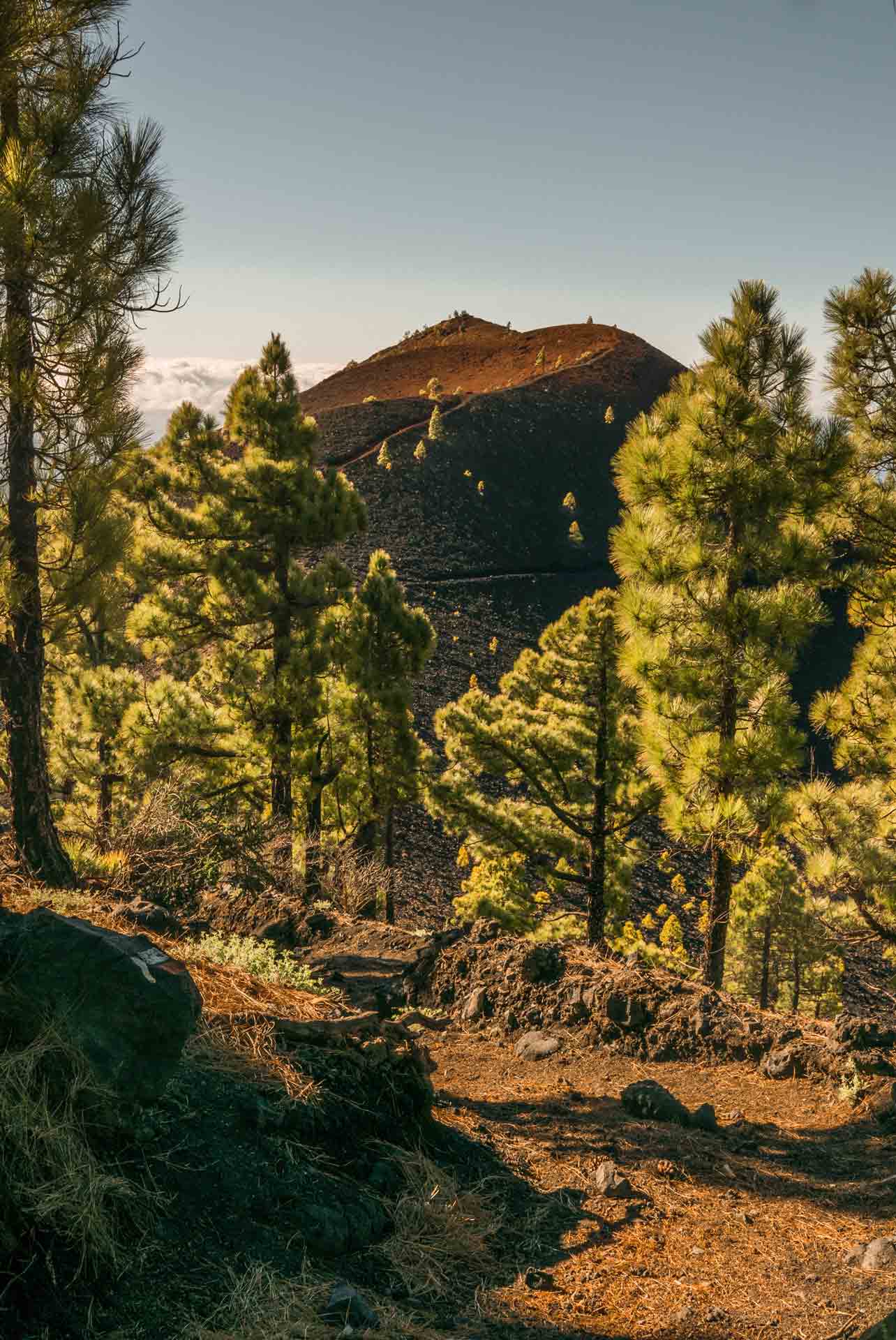 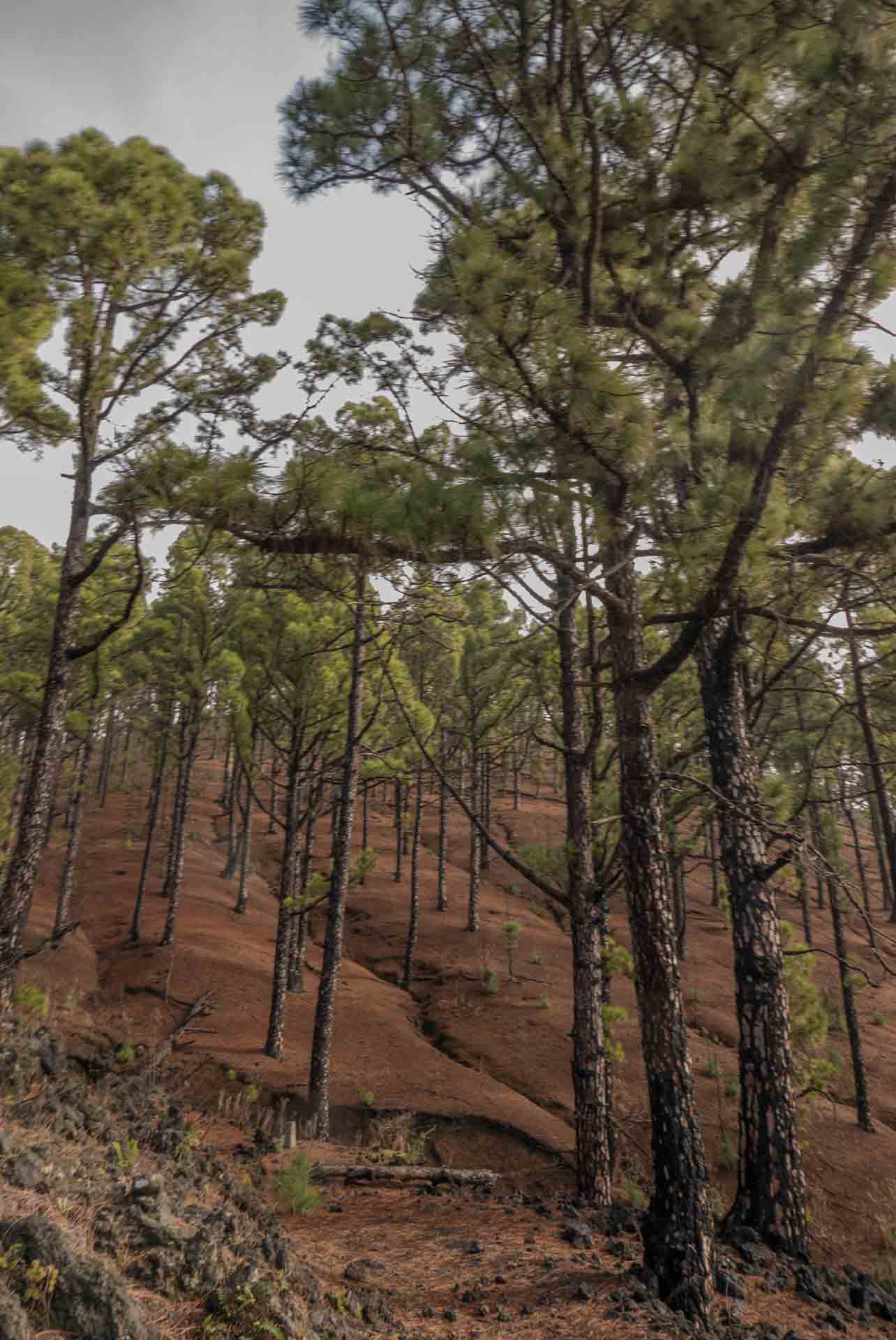 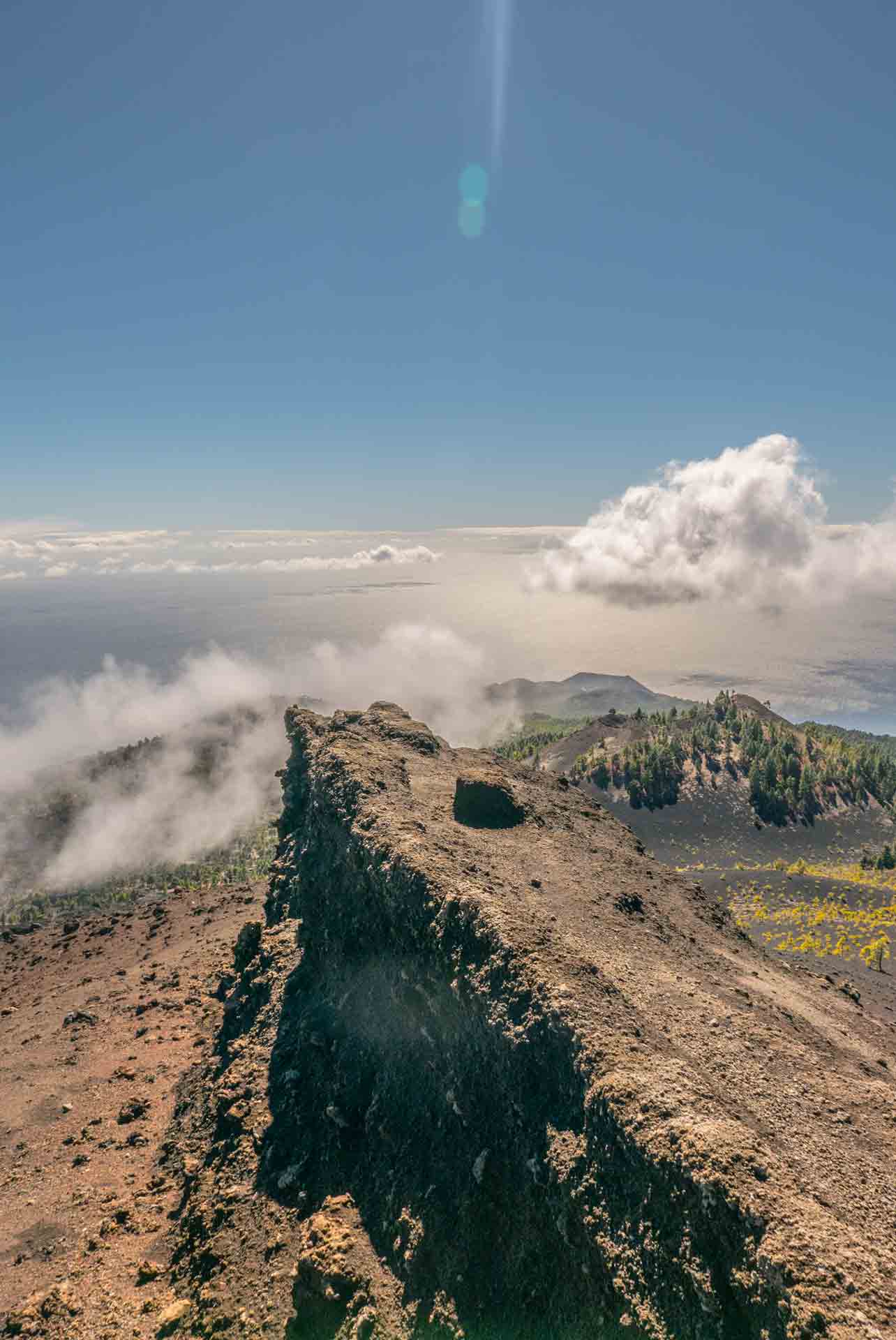 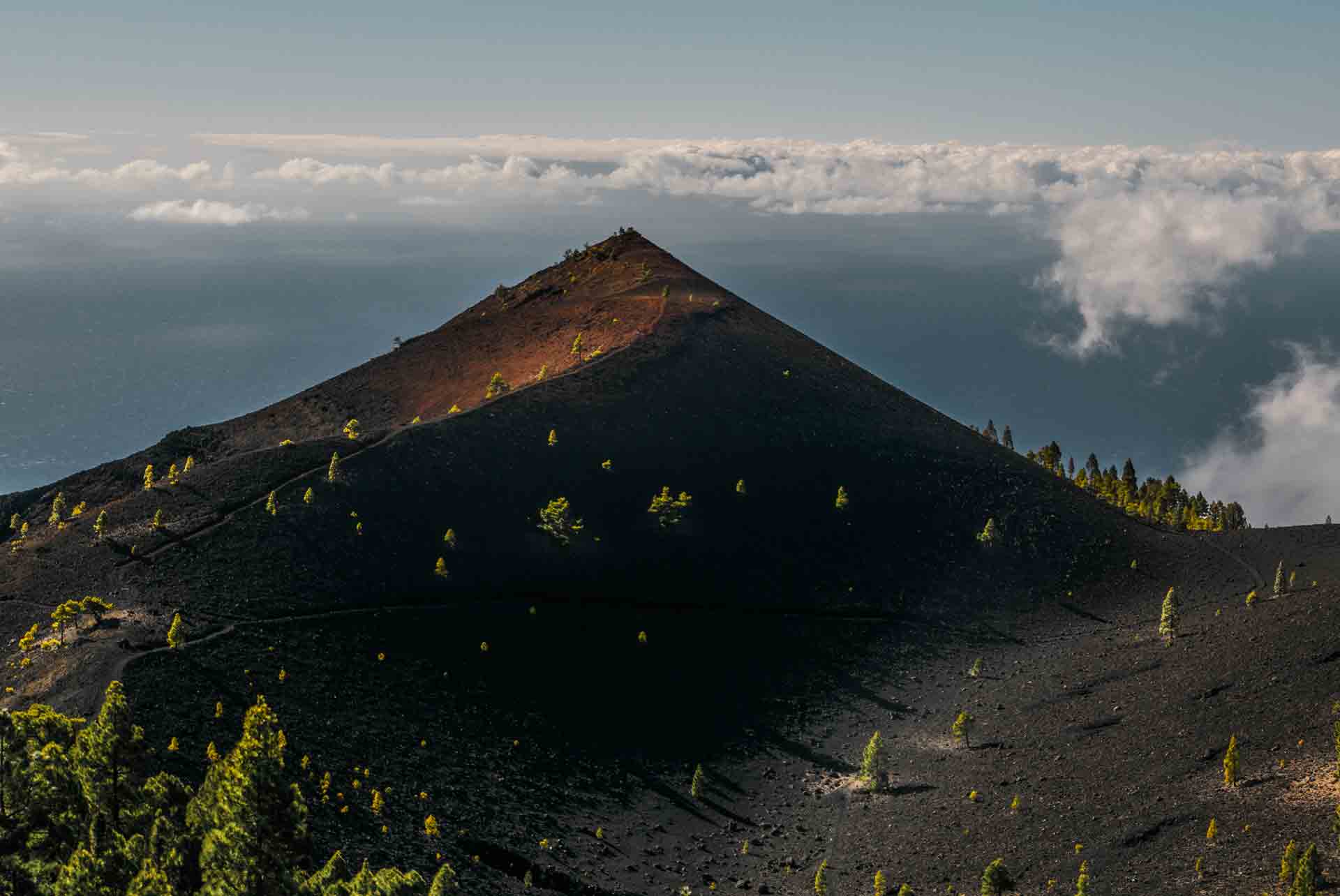 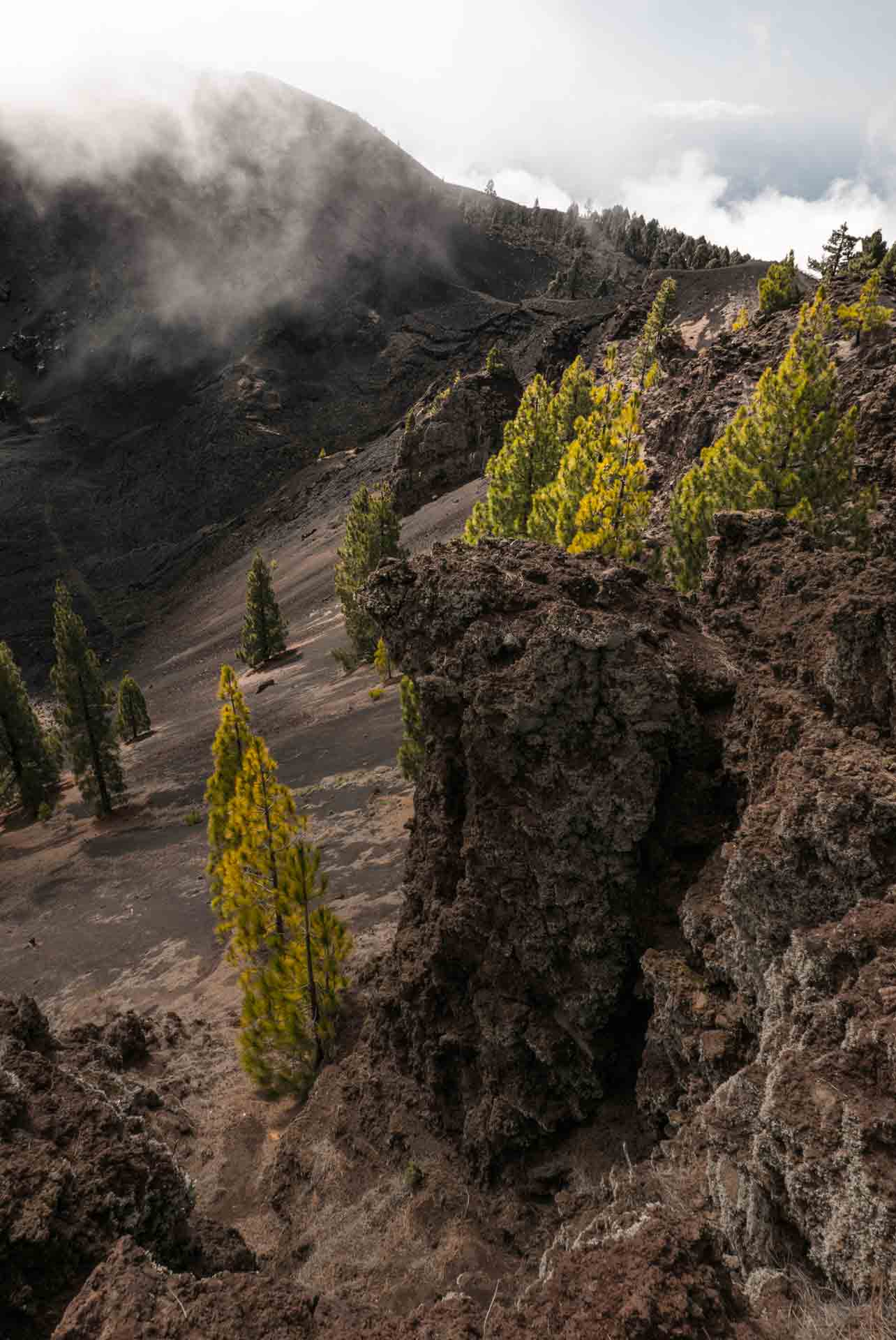 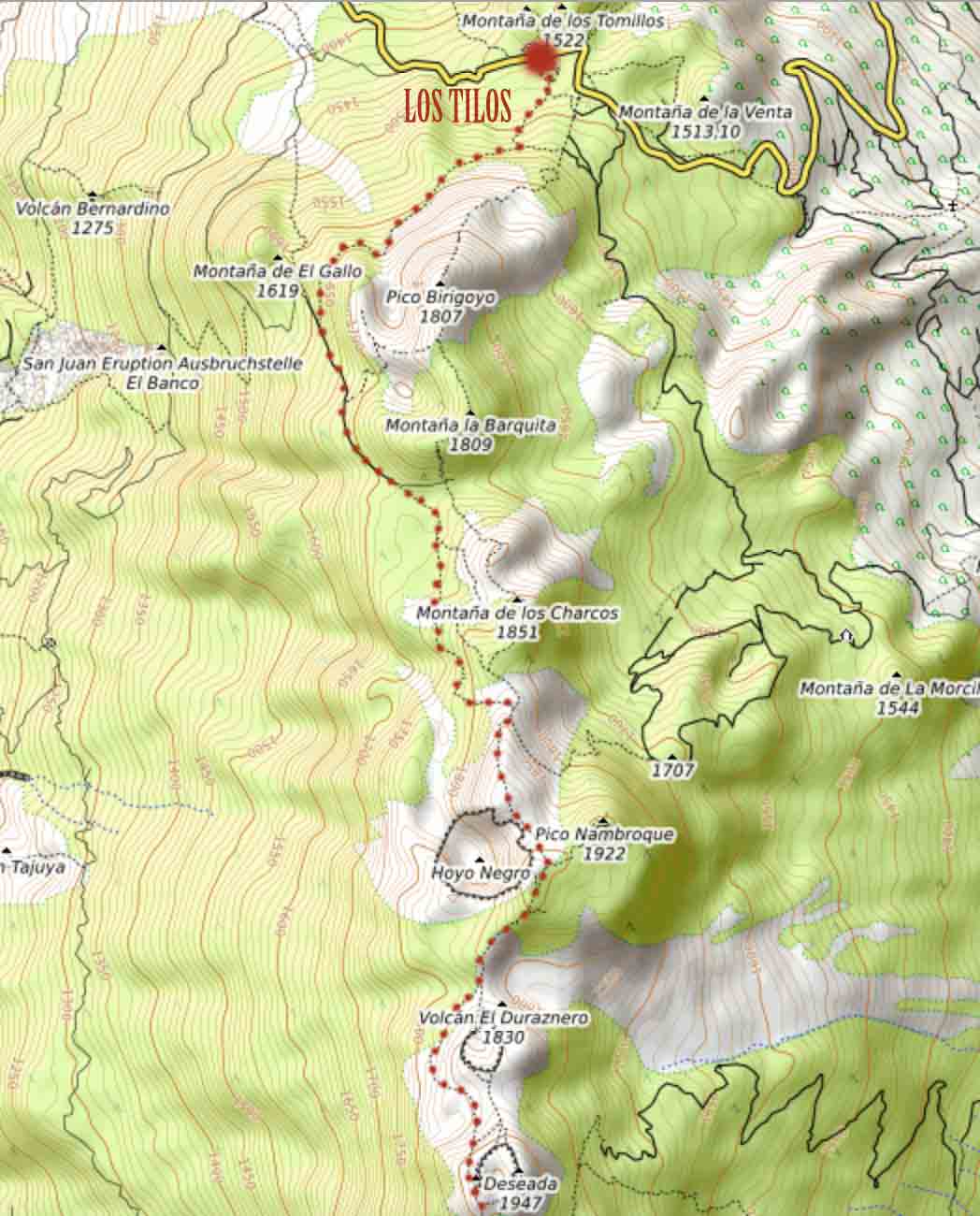 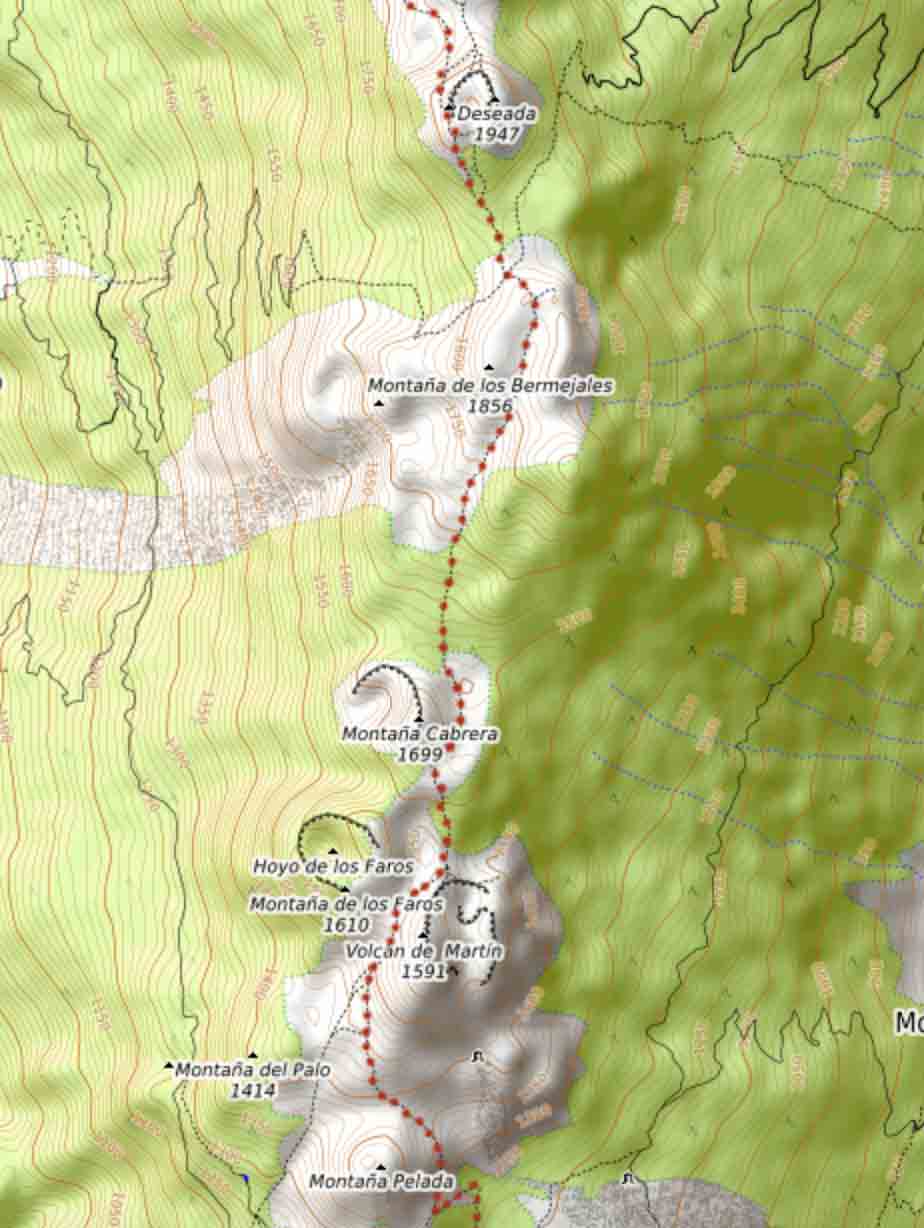 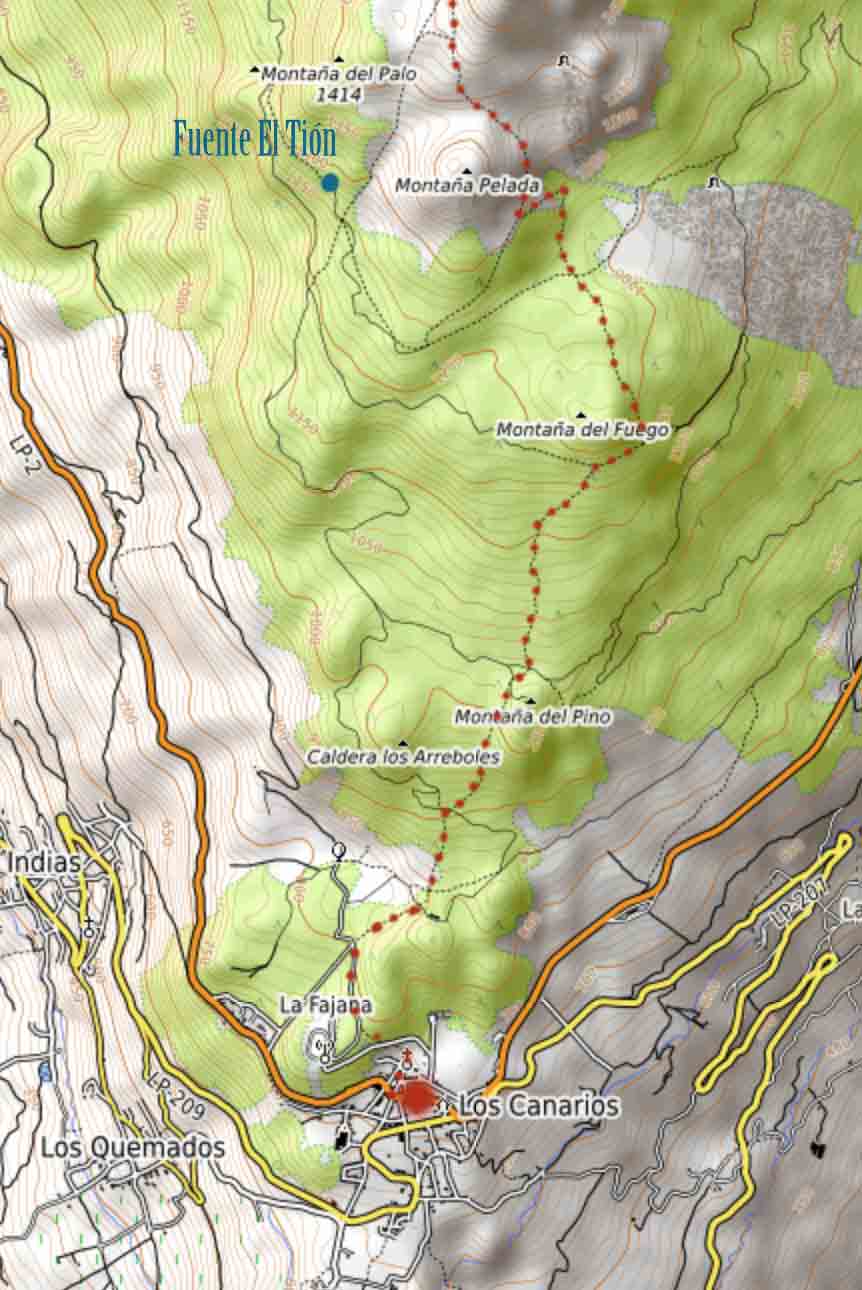 Route of the Volcanoes in La Palma

The volcanoes trail of La Palma crosses the main volcanoes area of the canary island, from El Refugio del Pilar to Fuencaliente. This route can be done backwards, from Fuencaliente to EL Pilar but it’s normally hiked on the other way due to the elevation gained is way less.

During the trail, the volcano landscape shows plenty of colour contrasts, from the green of the Canarian pines, the black lava trails and yellow-reds and brown oxidation tones of volcanic terrains.

The Route of La Palma follows the volcanic ridge that divides the south of the island into two sides, east and west. Walking through the volcanoes ridge trail allows hiking above the clouds of the east side, to contemplate the incredible views of the west side of the islands and other islands as Tenerife, La Gomera and El Hierro.

Walking this route from El Pilar to Fuencaliente is a bit easier than backwards so if you’re not considering doing the GR131 from Fuencaliente to Tazacorte.

Behind the picnic area of El Pilar begins the volcanoes route of La Palma. It starts going up through a pine forest to the south-west. It quickly gains elevation and as the trail goes higher the vegetation is poorer and at 1800m there are only a few pine trees challenging the heavy winds that are often present up there. The path goes around Birigoyo volcano following the gr131 and slowly goes up until it reaches La Deseada, where the trail follows the ups and downs of the orography originated by the volcanoes chain through which this trail pass by.

The most beautiful part of the path is probably the part from La Deseada to Volcan Martín. The landscape and amazing mountain relief make this part of the hike one of the most unique places of the Canary Islands. Heavy winds during the route can be presents but especially in this exposed area. This area is very exposed to the sun as well so be sure of bringing enough water during summer.

The way down to Fuencaliente

From Volcan Martín there are 2 paths, one that goes to the left and other to the right. The right one is indicated with white and yellow marks and is the one that goes to the water source Fuente del Tión that in case that is needed to fill your reservoirs is a good option because has an easy connection with the GR marked with red and white signs. If it’s not needed, the path on the left is the one following the GR131 and quickly goes down 800m of elevation through a pine forest until it ends at Fuencalien